The Cycling Physiology of Miguel Indurain 14 Years After Retirement 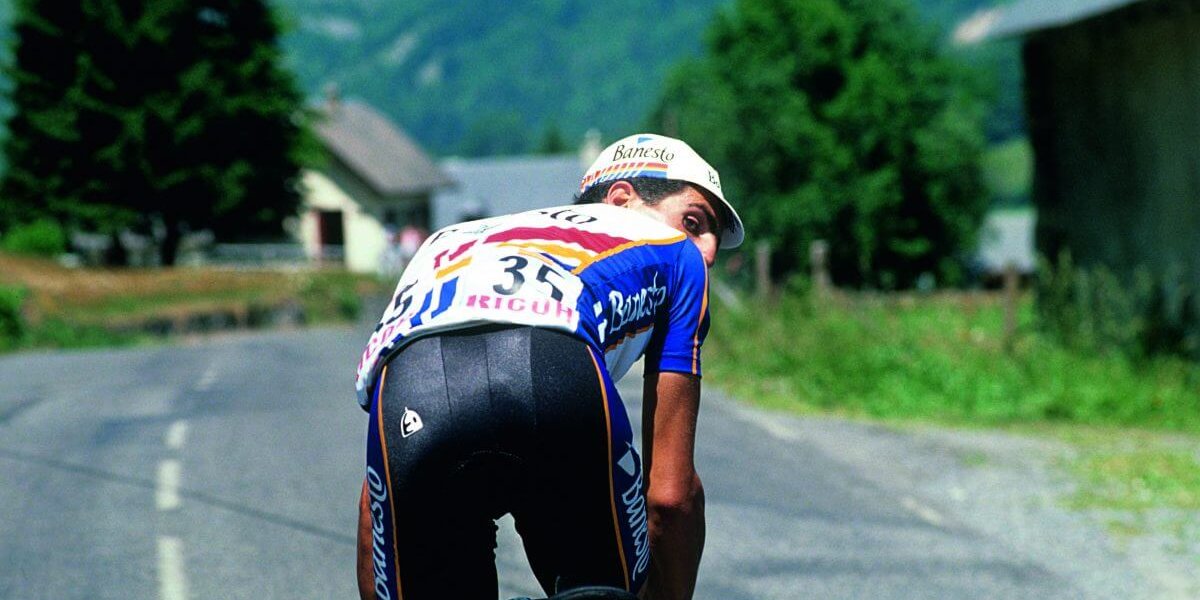 Miguel Indurain, five time Tour de France winner, two-time Giro winner, hour record holder, Olympic TT champion… the list goes on. How strong were these guys when racing is a common question to ask, however, what happens once they retire is equally as enthralling. In the past we’ve discussed detraining and its implications but here we’re looking at the changes that occur 14 years after retirement! A study conducted in 2012 by Inigo Mujika1 (full text here) will form the basis of this post. (Cover Credit: Offside)

Aim of the Study

The aim of this study was to report the physiological characteristics of Miguel Indurain 14 years after the end of his professional cycling career  while also gaining some insight into the aging and detraining process of elite cyclists. 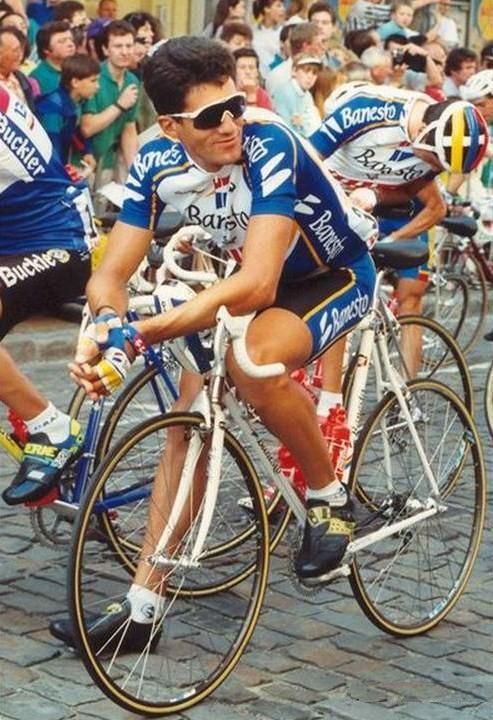 Indurain was tasked with performing a progressive cycle ergometer test to exhaustion (ramp test). The test itself started off at 100W and progressed by 25W every 3 minutes until exhaustion while measuring gas exchange, ventilation, heart rate and blood lactate response to the power output. This test was compared to a test undertaken by Indurain in 19962 shortly before he broke the hour record, although we must take caution with direct comparison as the tests themselves did not follow the exact same protocol and use the same equipment.

The author also discussed Indurain’s training load following his retirement. For the first four years he gradually reduced training volume from daily to once or twice a week “keeping under a heart rate of 165BPM”. After this structured detraining period he cycled 6000-8000km (still a big training volume in terms of distance) and ran once per week during the “warmer six months of the year”, while only riding his bike on a rare occasion during the other half of the year. At the time of this second test he was after completing 8000km in the preceding six months, so he was considered to be at the peak of his current fitness. This is a nice comparison to make as the previous test would’ve been at the peak of his professional fitness right before the hour record.

At the time of testing Indurain’s height was 1.86M, weight 92.2Kg and sum of seven skinfolds 72.3mm this is compared with a race weight of just over 80Kg. Maximal aerobic power (MAP) was calculated at 450W (4.88w/kg), VO2max 57ml.kg.min, max heart rate 191BPM and blood lactate 11.2 mmol/L. One marker which may interest you was the onset of blood lactate (OBLA) or anaerobic threshold or FTP or etc etc etc….which was calculated as 360W (3.9w/kg). His gross efficiency along with % of VO2max utilized at various markers make for interesting reading on his limits during his professional career and can be seen in the full text if you want to dig a little deeper into the physiology. A summary of results and changes can be seen below. 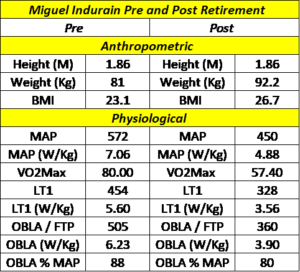 The numbers from the pre-test in 1996 are staggering to say the least but we knew he must have been top of his class in terms of power outputs to be as prolific a winner as he was. The post test is what we’re here for! A weight increase of 11Kg in 14 years isn’t massive given that he had come from peak physical condition, his BMI puts him in the slightly in the overweight category, but we do need to take into account muscle mass here. MAP was 450W or 4.88w/kg, to put that into perspective an average cat 1 rider in Ireland has a 5 minute power (similar to MAP) of 5.5w/kg with an average A3 rider sitting at 4.4w/kg, in other words Indurain would still perform favourably (at the time of this study) in a straight up 5 minute effort against most riders in the country!! OBLA or FTP was determined as 360W or 3.56w/kg pretty similar to what we’d see from cat 3 riders in Ireland. One interesting point is the occurrence of threshold at 88% of MAP in the 1996 test, really this is an upper physiological limit of performance, Indurain couldn’t have gotten much better at the time of this test.

Of course we see a marked decrease from when he was competing at the top level of the sport but, interestingly, the current numbers he is producing are not to be laughed at and would see him being competitive in many local races and club rides!

1 Mujika, I. (2012). The cycling physiology of Miguel Indurain 14 years after retirement. International journal of sports physiology and performance, 7(4), 397-400.