Periodization for Road Cycling – A Discussion 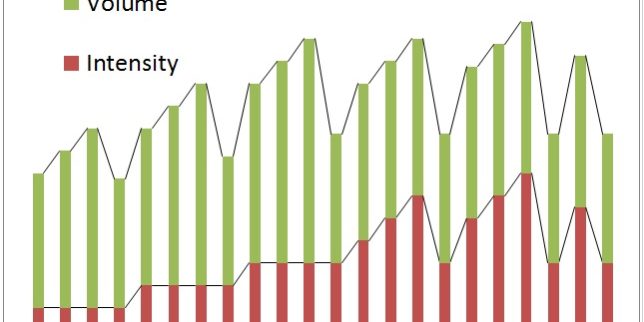 The purpose of periodization is to maximize training overload while bettering the stress:recovery relationship¹.This is shown in the image below. Before we begin we should state that the evidence base for effective periodization approaches is thin and possibly unreliable due to the high level of individual variability and the accumulation of “non-sport” stress such as illness, family life, relationships etc. which all take their toll on the athlete. Therefore, stating that the periodization method needs to be evidence backed is difficult to say, however, it is beneficial to have a structured approach to an athlete’s year/ season. In the sport of road cycling a variety of periodization methods are used by coaches the most common of which include: Traditional or “Linear” which is commonly attributed to Matveyev and adopted by Friel in his base/ build approach, Block which is attributed to Verchosankij and Reversed periodization. Also, it is worth noting the growing occurrence of the “Polarized” training approach. Linear periodization is an approach that occurs most often in the sport of road cycling. This approach follows logical steps of training stimuli in sequential order one after the other. This is typically characterised by high (low intensity) volume at the start and low (high intensity) volume at the time of competition. The premise on which this system is based is that the workouts become more competition like as competition approaches. In road cycling this is characterised by a multitude of training phases including aerobic base (<75% Anaerobic Threshold/ FTP), raising FTP (85 – 105% FTP) and targeting Vo2 Max & Anaerobic Capacity (>110% FTP). As mentioned linear periodization is the most commonly used within road cycling and as such is backed by the most anecdotal evidence. Recent research has shown marginal improvement in power at 4 mmol/L of lactate (commonly attributed to FTP) and power at Vo2 max when using linear over reversed and polarized training2. The issue with a strict linear periodization approach, especially in the case of elite athletes with a strong training history, is that to elicit desired adaptations training volume (especially in base phases) would need to be extremely high. Issues with multiple peaks within one season may also present themselves given the progressive and cyclical nature of this approach, commonly 1 – 2 true peaks are suggested as “possible” with this approach. Have a look at the figure below to check out an illustration of this approach! 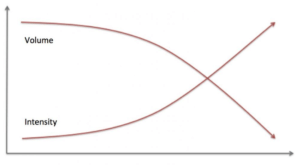 Block periodization may provide a counter to the above issues in that the sequencing of highly specific blocks of training may provide opportunities for a multi peak season. In a traditional block approach there are three mesocycles or “large focused blocks”: accumulation, transmutation and realisation. The accumulation block aims to develop the physical attributes with long lasting training effects, for example, aerobic endurance in cycling. The transmutation phase involves a concentrated block of sport specific work, for example, anaerobic capacity. The realization phase involves in a reduction in training stress with a much bigger emphasis on training the exact demands of the sport. This approach may be suitable for high level road cyclists as it provides highly specific overload to allow for super-compensation and therefore multi peaks within the season. Research by Ronnestad and colleagues found that a concentrated 4-week block of Vo2 Max training front loading the block with the most training stress elicited improved power at Vo2 Max, Wmax and 2 mmol/L of lactate over a traditional approach3.

Reverse periodization has become popular in training prescription as of late. The underlining description of this approach is aiming to maintain competition like intensity form the offset while increasing volume progressively4. In more basic terms the cyclist will develop their power and then increase their capacity to produce that power. The whole argument for this approach is that training long slow distance or aerobic endurance is not sport specific in that the demands on the body are not like those experienced in competition. The issue with reverse periodization is that it seems to disregard the evidence that aerobic base work improves exercise economy, that is, increased mitochondria, fat oxidation and the basic central adaptations to the cardiovascular system. The approach may also prove to develop overtraining symptoms with the athlete if load is not applied correctly. If training is not prescribed correctly within the later phases of this approach a detraining effect may also occur leading to a drop-in performance close to competition. This approach may prove beneficial to elite or apparent “full-time” athletes who have a greater control over their day to day stress.

For coaches it is crucial to know each method of periodization but personally we think it is vital that the coach invests the majority of their time in getting to “know” their athlete inside out. It is also key that the coach understands, in great detail, the physiological demands of the sport they are involved in so as to choose the most effect plan going forward. As stated previously each athlete responds differently to a stimulus. Ultimately periodization is about plotting the best route from A to B and aiming to predict future responses and occurrences which we know is next to impossible, therefore, it is paramount that a coach works closely with their athlete to pick, assess and reassess whichever method of periodization chosen.