Peaks Powers of The Irish Domestic Peloton A4 to A1 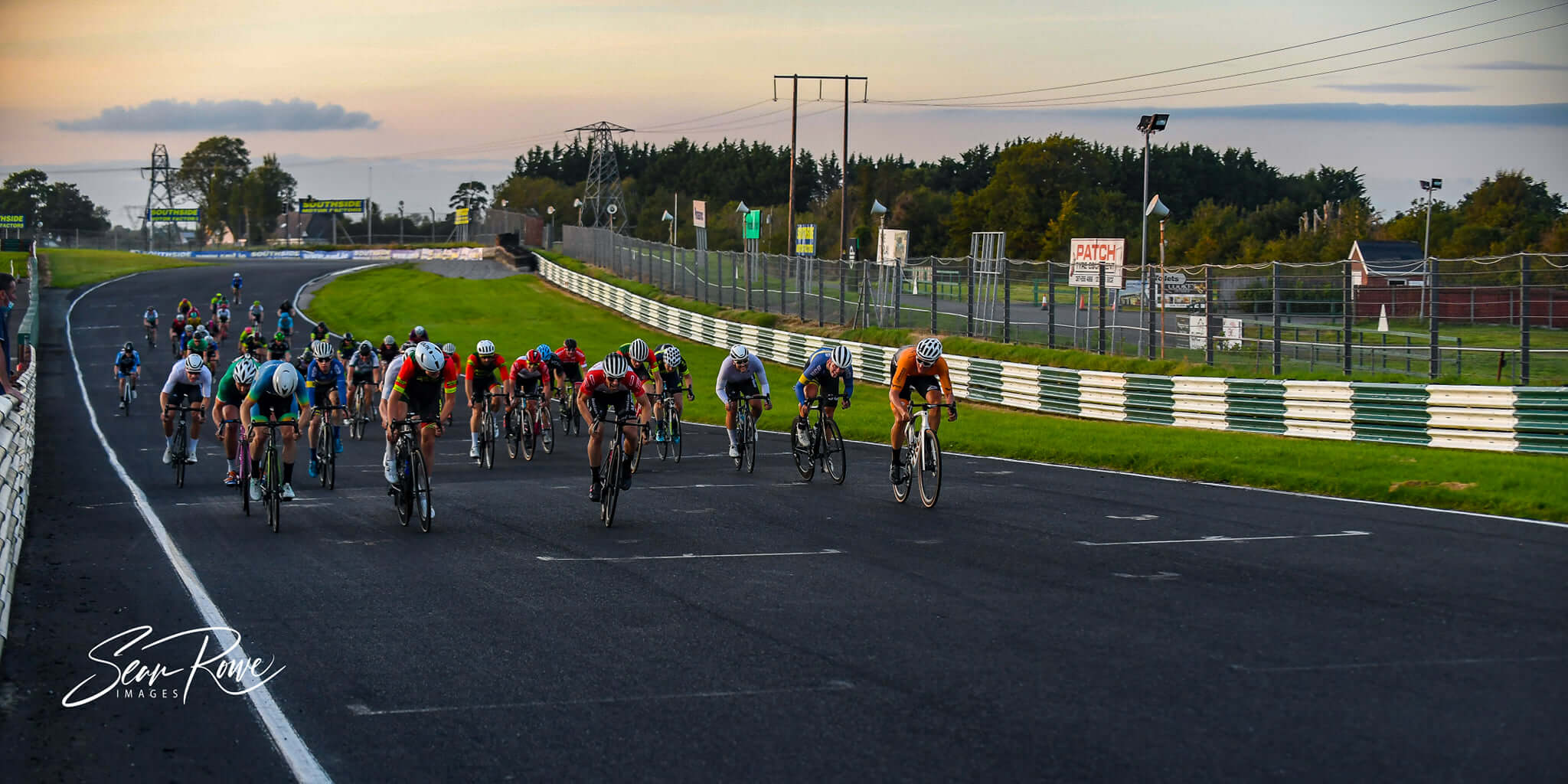 As a coach the biggest question I’m often asked is “how do I compare to….” or “what step up in power do I need to make to get to…”. Quite often athletes are very protective of their data and think giving anything away also gives away their competitive edge, leading to inflated or deflated numbers being discussed around the tea and sandwiches after a race! (Cover Photo Credit: Sean Rowe)

I will just add here before we dive into this chart that numbers are only a part of your picture as a bike racer, can you execute your race plan, can you adapt to a situation, how’s your bike handling are all questions you need to ask yourself before getting into this.

This piece is a more in-depth update to an earlier piece (2019) we wrote here.

How did we collect the data?

Data was collected via Google forms where participants were asked anonymously to submit their category, gender, weight, and power meter make and model along with peak power outputs over various durations.

What durations did we choose?

For this data analysis project, we chose peak power, 5 and 30 second power along with 1-, 5-, 20- and 60-minute power outputs. These are easily captured data points within various training software(s) and also allowed us to gain an insight into sprint power and a short and long duration time trial to determine critical power (CP) (more on that later).

Overall, 68 (n=68) individual male responses were selected for analysis (A4 n=14, A3 n=25, A2 n=10, A1 n=19). Unfortunately, only 5 female responses were collected through varying categories meaning we could not draw meaningful comparison here. You can view a full makeup of participants in table 1 below.

What were the results?

As with anything a bigger data set generally gives us a better indicator of what’s going on with something! When we look back at our 2018 data piece we could argue that there has been improvement across the board but with the sample being so small that’s a conclusion I’m not willing to make!

What we can see however, is the relative power outlined in table 2 below. To get your absolute power from this table simply multiply the w/kg figure by your current weight. Metrics are given plus or minus one standard deviation (±SD).

As a whole the submitted data followed a logical progression through categories, i.e., as you went higher in category (A4 to A1) the numbers got bigger! The largest ability gap seemed to be that of the jump from A3 to A2 which we can see by the difference in CP of 16% between groups.

CP can give us an insight into where the boundary between heavy and severe exercise lies. The critical power here would be the lowest point at which the severe exercise intensity domain would apply. CP can generally be maintained for around 45 minutes plus or minus depending on athlete type and training history (Hill, 1993). You can see a graphical representation of this in figure 1. To calculate CP here we plotted work done in joules and time (5- and 20-minute power outputs) and using regression found CP. The field test we use with athletes involves a 12- & 3-minute effort. But using this method best practice recommends time trials in the region of 3-20 minutes so this data should hold true! 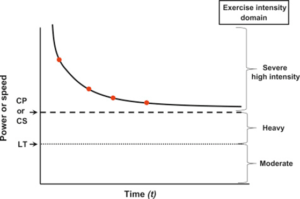 In this instance if we apply Coggan’s five zone model that most cyclists reading this will be familiar with, we can think of moderate exercise intensity as Zone 1 and 2, heavy as Zone 3 bordering zone 4 and severe Zone 4 and above.

Why did we present CP here? Well, CP is grounded in a lot more research than functional threshold power (FTP) meaning it is a much more reliable measure of performance for the racing cyclist. While the two markers can occur around the same power output they cannot be used interchangeably (Karsten et al., 2021).

What does W’ (pronounced watt prime) mean? W’ is the fixed amount of work that one could do above their CP. This is measured in joules or kilojoules. Think of this as the size of your matchbox for those harder repeated efforts. It is important to note here that higher isn’t always better with this metric. We also need to take this with a pinch of salt as it is dependent on maximal efforts being delivered, due to the nature of the way this data was collected we cannot say that each effort was maximal. 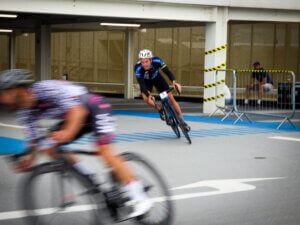 The last abbreviation on table 2 that some of you may not be familiar with is APR or anaerobic power reserve. In cycling the APR is defined as the difference between maximal sprint peak power output and power output at VO2max (Weyand, Lin & Bundle, 2006). While the CP model gives us insight into longer more sustained power outputs (around 3-60 minutes) the APR focuses on shorter duration power output and performance (Sanders & Heijboe, 2018). Put simply, for a well-trained athlete, the higher your APR, the more we might classify you as a “sprinter” and vice versa. From this reserve a coach may also specify power outputs within that short duration power domain rather than prescribe x % of CP/FTP etc, meaning it is a nice metric to both contrast across groups and also determine individualized targets. For the purpose of this piece, we determined APR as maximum power minus five-minute power, for example, a sprint power of 1200W minute and a 5-minute power of 400W would give us an APR of 800W. If you’re applying this method to direct your own training we would recommend using a more accurate measure of power at VO2max such as that achieved in a ramp test to exhaustion or in line with the protocol outlined by Sanders et al. (2017) here.

Data was presented with relative power (w/kg) in mind. This is important as it allows us to compare across weights. This is why we show w/kg here instead of outright power. But we would be doing those reading this a disservice if we were to say outright power was not important for certain, if not the majority of Irish races. Essentially outright power and decreased frontal area (aero!) will trump w/kg on those flatter races. So, while it’s important to note w/kg it should not come at the expense of losing excess weight with a corresponding decrease in performance.

How does this data apply and limitations to its application?

We all know bike racing is about a lot more than numbers! Take these data points with a pinch of salt if you’re thinking you’ll never be competitive there’s a lot more to it than being able to put out a great 20-minute power output. So, putting that element to one side…. 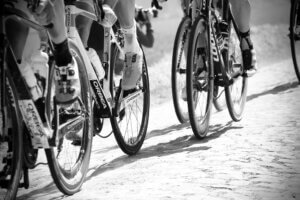 One downside of collecting data like this is we do not know where and when these peaks happened. In our last post we highlighted that “peak to 1-minute powers were often set in training, most likely due to freshness. In racing we’re setting these powers under fatigue from hours gone by, these durations are often your race winning effort. As we go up the categories we usually see more of a potential to produce these maximum efforts under fatigue (in racing) and the capacity to repeat them over time increases. 5-, 20- and 60-minute powers were set in racing oftentimes at the start or middle of a race to get into breakaways and push on from a group”. It is fair for us to assume that similar happened here although they were more than likely Zwift races with varying restrictions across the country! This also crosses over into the validity of the CP, W’ and APR data, these metrics need maximal inputs to be correct estimations and as noted above we just can’t be sure about that when collecting data in this manner.

The difference between A1 and A2 riders is worth highlighting also given the fact that these riders race together for the vast majority of open races and stage races in the country. The ability gap here is quite big for a similar competitive structure. This does highlight the merit of having those separate A2 races as a steppingstone up to A1.

As with any self-reported task we can get some inflated or deflated data, often the former! The ability to submit data anonymously went some way to combat this but it cannot stop it. In a similar vein power was not compared with the same unit or even same circumstances (hills, weather etc) so within power meter variance along with variance between makes and models means some caution has to be taken. Collecting power meter make and model data was one step in rectifying this, if make and model were not provided data were not analyzed. If make and model were deemed inaccurate (estimated Zwift Power etc.) data were not analyzed.

You may also note the lack of junior and youth data here, this is for a very good reason. While youths and juniors can benefit from training with power every so often there is no basis to compare at this age within a wider population. As mentioned above there’s much more to bike racing than putting out power.

Our premise is that this data gives you some insight into your competitors as a road cyclist in Ireland from a purely physical standpoint while accounting for the various points mentioned above. Our idea is that you may identify some gaps in performance such as a lack of sprint power comparative to others in your category meaning you could turn your attention to this for a block of training.

It should also give you some idea of the steps (physically) required to jump from category to category while always noting how important the tactical element is in accumulating upgrade points.

Finally, I’d like to thank all those who submitted their data to help build on this database. If anyone has any questions or would like to expand on things further our inbox is always open! Looking forward to diving into the 2021 data already (best save those excel templates!!).