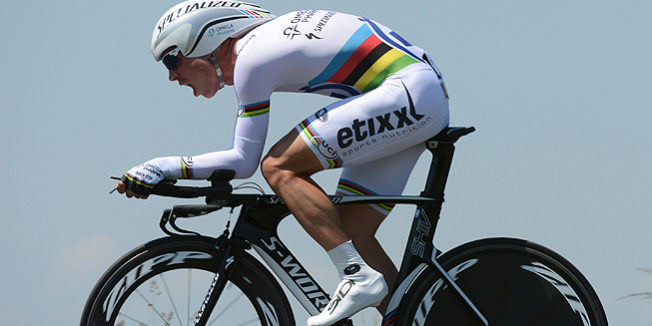 It’s a common school of thought that there are differences in power production from one cycling position to another the most common of which from our relaxed position on the hoods to a more aggressive aerodynamic position. This study, full text here, aimed to identify whether there was in fact observable differences in key physiological markers between these two positions.

Firstly, lets dig into some definitions – Critical Power (CP) can be referred to as the highest power output that can be sustained without progressively drawing on W′ (pronounced Watt Prime), where the latter represents, at the onset of exercise, a fixed amount of work (expressed in joules) that can be done when CP is exceeded1. Think of CP as the point at which you start to use your available matches in your matchbox! As coaches we use these metrics to prescribe training BUT if these metrics are altered by position then how can we prescribe accurate training numbers if we have not tested in these positions?

So, as touched on earlier, the aim of this study was to assess power-duration parameters (CP & W’) as well as the response to individual efforts on the brake levers and in TT cycling positions.

Seven (six males and one female) well trained, category 2 cyclists participated in the study using their own road bikes and TT bike setup to conduct the trials. Each participant visited the laboratory on four separate occasions separated by minimum one day’s rest and maximum seven day’s rest. The first two visits tests were conducted on the road bike with three separate maximal efforts to undertake, 3 and 12 minutes on day 1 and 5 minute on day 2. The final two days of testing were conducted in the TT position and followed the same 3, 12 and 5-minute approach. Power output, cadence and heart rate were recorded.

Power output for the 3, 5 and 12-minute tests reduced by 1.6%, 3.3% and 3.9% respectively in the TT position. The 12-minute effort, unlike the 3 and 5-minute trials, showed a significant decrease in cadence and increase in heart rate in the time trial position versus the road bike. CP was significantly different (276±54W Vs 290±66W), there was no difference observed in W’.

Conclusions, how does this apply to us and limits of the study?

The study essentially showed us that as duration of the trial gets longer mean power output may progressively decrease and while the only significant decrease was shown in the 5-minute trial margins as little as 1.6 % can matter significantly to the elite athlete. The authors suggest that the different biomechanical position alters cardiovascular outputs for example decreased stroke volume, cardiac output, decreased gross efficiency etc. CP was significantly reduced in the TT position which is important for athlete undertaking longer duration events with more aerobic contribution, consistent with the overwhelming majority of TTs riders reading this blog will undertake.

Applying this to our own training we can takeaway some valuable lessons, if you plan on racing in a TT position you need to be aware of the apparent decrease in power output as duration increases. Keeping this in mind it may be beneficial to test in the position itself to allow you to set pacing guidelines and accurate training zones for whatever your chosen event is. I’m still of the opinion that absolute maximal work (Zone 5 and above) in training should be conducted in an upright position to maximize adaptations if your chosen event is longer. If you’re racing something such as a prologue or team pursuit, then of course you should train in the TT position at these maximal power outputs. A lot of this really does come back to training for the demands of your event be that position, duration or weather!

This study is affected by some limitations, one of which being the lack of gas analysis used within their trials. It would’ve been interesting to see whether oxygen uptake differed between positions. The study would’ve also benefited from a larger sample size which could have possibly altered the statistical differences. It also has to be noted that the further up the spectrum of elite cyclist you go the more maximized their position is from a biomechanical and power producing standpoint so their drop off may not be apparent at all! It is also worth evaluating the trade-off between speed from your TT position and actual power output, if you’re going faster for less power than we’re still winning!